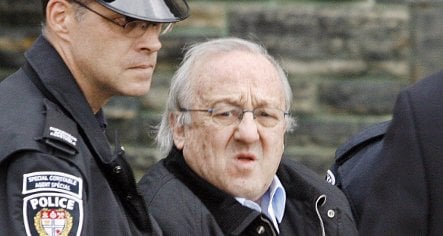 After losing a decade-long battle to avoid extradition, Karlheinz Schreiber touched down in Munich to face German police waiting to take him to a single cell in Augsburg prison before trial.

Schreiber is accused of playing a key role in a sprawling slush-fund scandal that rocked the Christian Democratic Union (CDU) party in the 1990s and helped pave the way for current chancellor Angela Merkel’s rise to power.

Schreiber faces charges of bribery, fraud and tax evasion, said chief prosecutor Reinhard Nemetz. “The maximum sentence could be up to 15 years in prison,” he told reporters.

Nemetz said the accused was in good shape physically and would appear at a closed-door hearing on Tuesday to have the charges against him read out. However, it was still not clear whether the politically sensitive case would be heard in court before the national elections on September 27.

Herbert Veh, chief justice on the regional court, said: “The date of the national election will not play a role in the decision.”

Schreiber’s undeclared contributions to the CDU sparked a political scandal that claimed the scalp of the then head of the party, Wolfgang Schäuble, now interior minister, and tarnished former chancellor Helmut Kohl’s legacy.

Schreiber, who holds both German and Canadian nationality, is believed to have made an undeclared one-million-mark (€500,000) donation to the CDU.

In 2002, he also told a delegation of German deputies visiting him in Toronto that he had paid at least €510,000 to the Christian Social Union (CSU), Bavaria’s sister party of the CDU.

He also stands accused of evading taxes on millions of euros in income from arms deals as well as offering bribes to ensure government approval for the sale of armoured cars to Saudi Arabia.

A Canadian court on Sunday rejected his final appeal to avoid extradition to Germany and he was flown out from Toronto later that night.

“Over a 10-year period, Mr. Schreiber was given every reasonable opportunity to challenge his extradition,” said Canadian Justice Minister Rob Nicholson.

“His surrender to Germany was in full accord with the law and consistent with the spirit and purpose of extradition.”

Speaking to reporters on Sunday, Schreiber said there was a political dimension to his extradition, with a general election less than two months away.

“The Social Democrats won three elections with my case in the past,” he said, referring to the junior partner in Merkel’s coalition government.

“If I come now that would be the greatest thing, it would start a huge investigation and … they would think they could win the next election.”

The Social Democrats are currently trailing Chancellor Angela Merkel’s conservative bloc by as much as 15 points in the polls.

But the Canadian authorities rejected Schreiber’s argument, concluding that it was “the latest in a series of creative instalments to frustrate a legitimate extradition process.”