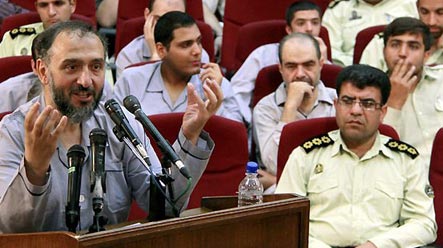 Frank-Walter Steinmeier said Berlin had reason to believe the people brought before a revolutionary court in Tehran Saturday would not have a “transparent or fair trial.”

“The reports about the beginning of the trial of members of the opposition in Iran deeply concern us,” he said in a statement.

“The Iranian government is called on to release the political prisoners and respect international standards for the protection of the civil and political rights of its citizens to which it has agreed.”

Steinmeier said Iran had yet to publish a complete list of jailed members of the political opposition who would face trial.

“The exact number of political prisoners sitting in prison who were arrested after the disputed presidential election on June 12, 2009 is unknown but their number is estimated at several hundred,” he said.

“In addition, there are the several political prisoners who were already arrested in recent years.”

Iran’s Islamic republic, which is battling the worst political crisis in its 30-year history, put about 100 people on trial before a revolutionary court Saturday on charges including rioting, vandalism, having ties with counter-revolutionary groups and plotting to launch a “velvet revolution.”

Around 2,000 protesters, reformists, political activists and journalists were initially detained by authorities in a crackdown on the massive public protests over the vote, which the opposition has branded a fraud.

Around 30 people were killed and hundreds wounded in the unrest. Most protesters have been released but around 250 still remain behind bars.