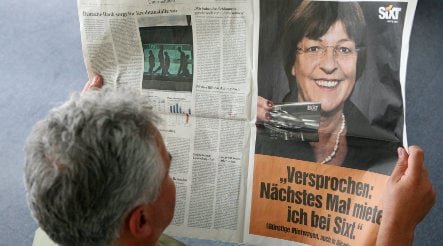 While Schmidt tried to limit the political damage to done to her by revelations that she had sent a driver with her official car from Berlin to meet her at her holiday home in Spain for an official appointment, Sixt’s advertisers were getting creative.

Just one day after the story broke, a photo of the embattled minister was used in an online advert with the line, “Taking the office car on holiday? But there is a Sixt in Alicante.”

This was followed a day later by a newspaper advert, complete with a Sixt customer card photo-shopped into Schmidt’s hand, and the text, “I promise, next time I will rent with Sixt.”

The incident, in which Schmidt’s official car was stolen and later retrieved, created public outrage over the health minister’s alleged misuse of taxpayer money.

The full Sixt advert now includes a note that the daily rate includes insurance against theft.

Erich Sixt, chairman of the board, said the ads had nothing to do with the election campaign, which is ramping up ahead of September’s poll.

“There is absolutely no political background,” he told Der Spiegel magazine. “We rent to politicians of all colour, as long as they pay the bills.” He said the advertising campaign had attracted huge attention, and that many politicians practically provoke such satire.

Angela Merkel’s hair was perhaps the most famous target for the adverts, when a picture of her with a dowdy style was placed next to one with digitally windswept hair and the question, “Fancy a new hair style? Rent a convertible.”

Sixt has a legal right to indulge in such stunts – and politicians have learned to fake a relaxed attitude when they are targeted – after Oskar Lafontaine failed in a legal bid to ban an advert which spoofed his resignation from the first Social Democratic-Green coalition government in 1999.

The advert, which used a photograph of the cabinet with Lafontaine crossed out, carried the text, “Sixt also leases cars for co-workers in their test-period.” Although Lafontaine won in the first instance, a federal court ruled that current political events could be used as the basis for a satirical advertising campaign.

Schmidt’s office told daily Süddeutsche Zeitung that they would not be commenting on the latest campaign.