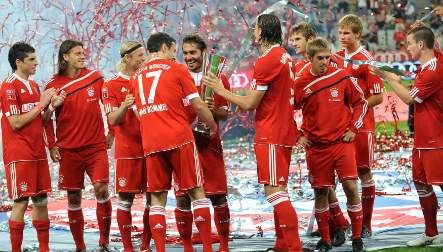 Bayern, playing in front of a 70,000 crowd at their Allianz Arena home, delivered the first piece of silverware for new coach Louis Van Gaal a week ahead of the start of the new Bundesliga season.

But Sir Alex Ferguson’s English champions were left to rue a succession of decent opportunities with Dimitar Berbatov hitting the woodwork while Michael Owen and Wayne Rooney also came close.

Three minutes before half-time, Berbatov slipped by the Bayern defenders only to see his shot come back off the post with goalkeeper Michael Rensing struggling to make up his ground.

Owen saw Rensing save a shot in the 62nd minute while Rooney also went close late on.

In the shootout, Rensing saved spot-kicks from Patrice Evra and Jonny Evans in the shoot-out before Daniel van Buyten stroked in the winner.

“We played some very good football in the first half,” said Van Gaal. “We should have scored but Manchester United also should have found the target in the second period. It was tight right from the start so I am happy to have won.”

In the play-off for third place, Argentina’s Boca Juniors defeated AC Milan 4-3 in a penalty shootout after the two sides had been locked 1-1 after 90 minutes.

Thiago Silva gave the Italians the lead from close range after 27 minutes before Lucas Viatri levelled for Boca three minutes from time.