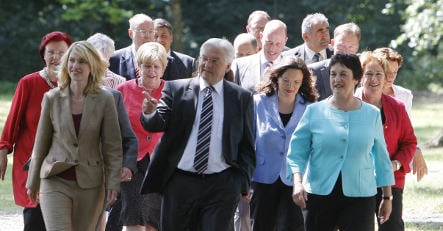 Safer on foot: without a limo in sight, Steinmeier leads his new team. Photo:DPA

Steinmeier’s “shadow cabinet” for the national election campaign includes 10 women and eight men, among them some fresh – and young – faces with no experience in federal politics.

The current chairwoman of the Bundestag defence committee, Ulrike Merten, will become the first woman responsible for the key portfolio of defence in a campaign.

The Social Democrats, who are trailing Chancellor Angela Merkel’s Christian Democrats in every published poll, have less than two months to make up the gap before the polls open on September 27.

Steinmeier, who serves as Foreign Minister in the uneasy grand coalition government with Merkel’s conservative Christian Democrats (CDU), has appealed repeatedly in the past few days to the party not to give up the fight against her party.

He announced his election campaign team in Potsdam after a closed party meeting, which was overshadowed by discussion of the damaging row over Health Minister Schmidt’s embarrassing decision to take her official car on holiday in Spain. After the €90,000 armoured Mercedes S-Class was stolen, taxpayer advocacy groups have criticised Schmidt, saying it was unethical for her to spend tax dollars to have her driver make the 2,387-kilometre journey from Berlin to accompany her on a few minor official visits.

Though Schmidt has said she will not resign, she has been left out of Steinmeier’s team for the time being. For now her place is filled by the party’s parliamentary health spokeswoman Carola Reimann, who will also take responsibility for universities and research.

Current Finance Minister Peer Steinbrück will take the key role of the SPD’s campaign spokesman for finance and the economy. He will be backed up by 37-year-old businessman Harald Christ, who will look after small business.

Christ is one of several fresh faces, the youngest of whom is the 35-year-old social minister for Mecklenburg-Western Pomerania, Manuela Schwesig, who will speak for family issues during the campaign.

The vice-president of the National Union of Farmers (DBV), Udo Folgart, will take agriculture.

SPD parliamentary leader Thomas Oppermann will go up against the CDU’s Interior Minister Wolfgang Schäuble in the campaign.

The current chief of the state chancellery, Barbara Kisseler, will be responsible for arts and culture.

SPD treasurer Barbara Hendricks takes over consumer and investor affairs and federal MP Dagmar Freitag will look after sports. The commissioner for disabilities, Karin Evers-Meyer, will take on the same issue in the Steinmeier team.