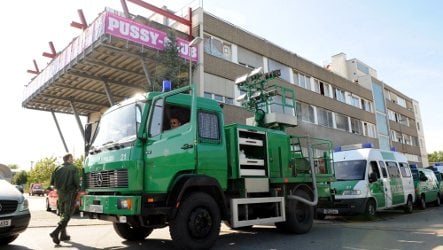 Before gaining to permission to open, the brothel was forced to change its offer of €70 for unlimited sex with prostitutes and free drinks. Now the establishment offers “20 minutes of sex for only €25,” according to its website. Further arrangements are subject to “negotiation.”

On Monday some 700 officers searched brothels that offer such deals in four states on suspicion that the establishments were employing foreign prostitutes without work visas and withholding their social benefits.

The two brothels in Heidelberg and Fellbach were closed due to poor hygienic conditions. Massage tables and other surfaces were reportedly so dirty that they were a health hazard.

The “Pussy Club” in Fellbach remains closed. The other two brothels offering flat-rate deals in Wuppertal and Berlin’s Schönefeld district were not shut down.

Meanwhile the Heidelberg bordello is under pressure from the city, which has cited zoning laws as grounds for closure. A decision from the administrative court in Karlsruhe is expected soon.