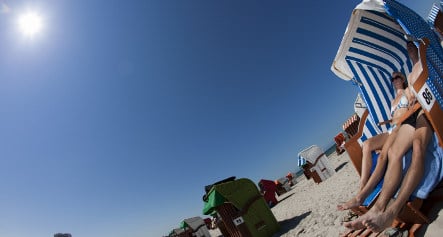 German vacationers in the Mediterranean are notorious for rushing out to the pool deck at the break of dawn to reserve the most desirable poolside chairs with their beach towels, infuriating fellow guests when the chair remains occupied by only the towel until mid-afternoon while the Germans wander around the locale.

Now, travel agency Thomas Cook is offering the “Comfort, worry-free package” in hopes of relieving German travellers of the pre-dawn panic to get a poolside post. Peace of mind can be purchased for €3 per day, or a bulk rate of €49 per week for family travellers, the company announced.

So far, nine resorts in Turkey, Egypt and the Canary Islands have agreed to the reservation system.

Thomas Cook spokesperson Peter Frankhauser told the German daily Süddeutsche Zeitung that he hopes “with this, we’re relieving our clients of early-morning stress.”

The offer is in preparation for the winter travel season, so Frankhauser said he wasn’t sure how well it would be received. But the Thomas Cook manager says he himself is looking forward to using the package to prevent his wife from kicking him out of their hotel room at dawn to reserve their own poolside spots.