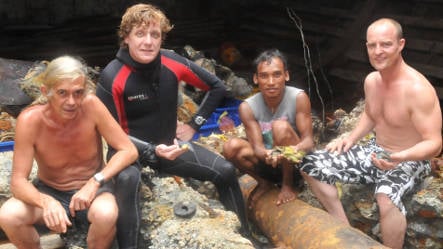 The pirate ship Forbes sank off the coast of Borneo in 1806. Dresden resident Martin Wenzel and his partner Klaus Keppler spent €3 million of their own money over the past two years trawling the tropical waters for loot from the Forbes and other vessels, the newspaper reported.

“Up until now, we’ve searched 35 wrecks, two had valuable cargo. Now the costs for our three salvage ships, 50 man crew, the licences and all that, are covered,” Wenzel told Bild.

The haul from the Forbes turned up 1.5 tonnes of silver coins, gold jewellery, cannons, crystal and Ming porcelain. The newspaper reported that the coins alone are worth at least €7 million.

“At first, everything on the ocean floor looks encrusted and worthless. But when you hold the treasure in your hands, it’s an indescribable rush of adrenaline. You’re witness to times past,” Wenzel told Bild.

Wenzel flies to Indonesia six times a year to keep track of the salvage operations. His partner Keppler is there permanently. Wenzel said his next trip is already booked.

“We’ve found clues in shipping archives about a wreck off of East Timor that had two tonnes of gold on board,” Wenzel said. “But we don’t yet have the salvage license. They are extremely expensive and the political situation there is difficult.”