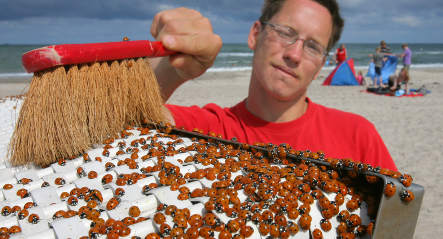 Hamburg, Mecklenburg-Western Pomerania and Schleswig-Holstein have all seen an influx in the Asian ladybug (Harmonia axyridis) thanks to mild weather and humid summer days. According to Bernd Quellmalz, the spokesman for the Hamburg state nature conservation society (Nabu), the beetles have spread quickly throughout Europe.

Click here for The Local’s photo gallery of the ladybug invasion.

“They were first brought here by people and just normal routes of transport,” he told The Local. “Scientists first spotted them in Belgium in 2001. They came to Hamburg a year later and can now be found all across Europe.”

The influx in the ladybug population is cause for gardeners to rejoice.

“There is no damage to your garden. They eat the aphids that eat the leaves, so these little beetles are actually saving gardeners a lot of time and effort in getting rid of the pests in their backyards,” Quellmalz said.

Asian ladybugs are usually introduced to other environments as a way to naturally combat plant-damaging aphids – the beetle’s favourite snack. The average beetle will eat between 50 and 250 aphids on a daily basis, but the Asian species is known to eat five times as many.

But when Asian beetles were introduced to the US in the 1980s as a natural solution to the aphid problem, the voracious appetite of the foreign population has threatened some local species.

“For now, the local species of ladybugs are still faring well with their new neighbours, but we can’t say yet if that will always be the case,” Quellmalz said.

Along with its helpful eating habits, Asian ladybugs lay eggs twice a season, compared to once a season by other ladybug species. A ladybug larva will eat 400 to 600 leaf louses such as aphids, scales and mites by the time it becomes a pupa – about three weeks.

Despite travellers seeing red during their coastal excursions to Mecklenburg-Western Pomerania, Bernd says the increased population is hardly a problem.

“What we’re observing is the completely normal cycle of the ladybugs,” explained Bernd Quellmalz in a press release on the Nabu website. “It is not, under any circumstances, a problem.”