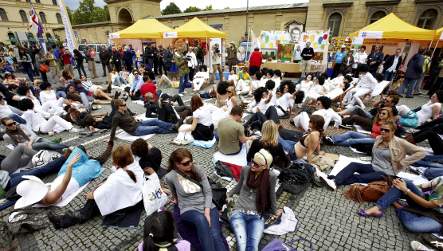 Flash mobs are an internet phenomenon that emerged around 2003. They occur when large groups of people gather in public places after receiving a last-minute text message or email telling them where to be and what to do.

According to the newspaper, artist Dirk Schadt was organising a flash mob picnic at Braunschweig’s central Schlossplatz when he was contacted by someone who claimed to be from the local Ordnungsamt, the office of public order, to tell him such gatherings were prohibited.

Schadt’s picnic would have been the third such picnic on the Schlossplatz in about a year, he wrote on the Indymedia web site. The square has also been the site of other flash mob gatherings, including an April 1 event where hundreds of people “spontaneously” celebrated the whimsical World Freeze Day by standing frozen in place for five minutes.

The Ordnungsamt apparently caught wind of Schadt’s upcoming event when an employee monitored a flash mob group on the social networking site StudiVZ. The bureaucrat requested Schadt’s email address from the group moderator, and then got in touch with Schadt to tell him such events were not allowed.

“It made me think of an agency in a former neighbouring country of the Federal Republic of Germany,” Schadt wrote on the Indymedia web site, referring to the feared East German secret police, the Stasi.

He warned readers that the event, planned for August 8, would not take place and that anyone on the square that day who, ”spreads a blanket, brings food and drink, shoots the breeze with friends, sings or dances a tango will likely be prevented from doing so by police forces.”

A city spokesman contacted by Zeit Online said Schadt would have been within the law had he contacted the city in advance and gotten a permit.

Schadt is not the only German to run afoul of officialdom in recent months for helping to organise a flash mob. After an impromptu party of 5,000 left trash and debris scattered on a Sylt beach, local officials are trying to extract money from the event’s organiser, who announced the event on the StudiVZ site.