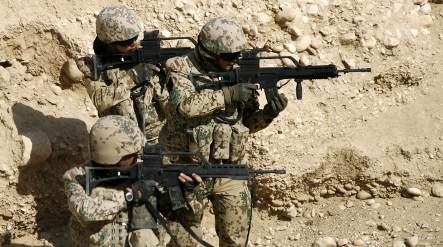 Defence Minister Franz Josef Jung signed the orders this past Friday and German troops stationed in war zones will soon receive pocket-sized cards clarifying the new rules of engagement. A ministry spokesman explained that the cards were written using language that “simplified and clearly formulated” the rules for soldiers.

Until now, German soldiers were not permitted to shoot if their attackers had turned around and were fleeing. The ministry did not clarify if the change in policy had to do with a recently-launched offensive around Kundus in northern Afghanistan that includes over 300 German troops, the first offensive forces have taken part in since World War II.

Germany’s involvement in foreign military operations, especially in Afghanistan, is extremely controversial with the German public. After the death of three soldiers last month, Jung, who belongs to Chancellor Angela Merkel’s Christian Democratic Union (CDU), refused to describe the fighting in Afghanistan as a war.

“The Bundeswehr is getting pulled deeper into the swamp,” said Dietmar Bartsch, a leader within the hard-line socialist Left Party, of the German military’s involvement in Afghanistan.

Other politicians welcomed the defence ministry’s change of policy.

“It’s incomprehensible why German soldiers in Afghanistan have, up until now, had less authority than a policeman in Germany,” said Rainer Stinner with the pro-business Free Democratic Party. But he described Monday’s announcement as a change in policy that the government was not being completely open about.

“The changes to the rules of engagement card are expansions, not clarifications. That may not be withheld from the public,” said Stinner.

CDU parliamentary defence expert Bernd Siebert said the rule change would help clarify the legal status of soldiers when they use their weapons because grey areas in the old rules could have potentially opened soldiers up to investigation and prosecution.