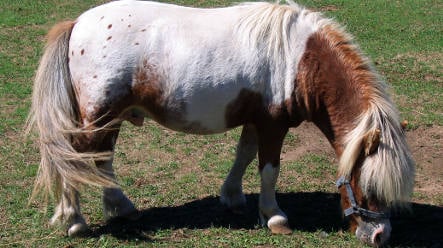 The four mini-horses appeared quite suddenly in northern Bavaria, in a region bordering the Rhön UNESCO biosphere reserve. A group of hikers came upon the tiny horses, who were clearly running around without their owner, and called the authorities, police spokesman Karl-Heinz Schmitt told The Local.

“We don’t know where they came from or anything about them,” Schmitt said, adding that the mysterious metre-high horses are in good health and have a very “peaceful” temperament.

He speculated that the wee horses must belong to a nearby farmer who has not been out on the horse pasture for a few days and has thus not noticed their disappearance. Schmitt said his police force has already been in contact with neighbouring jurisdictions but no mini-horse disappearances have been reported. He added that no circuses have been in the region lately.

The only identifying mark on any of the animals is a brand in the shape of the numbers 856 on a light-brown member of the herd.

Fortunately for the forlorn mini-horses, beer-brewing Franciscan monks from the nearby Kreuzberg cloister have agreed to provide refuge the animals until their owner is found.

“They’ve got food, water, grass, sun and shade – everything a horse could want there,” Schmitt told The Local.

The cloister, which was founded in 1692, runs a brewery, restaurant and a small bed and breakfast. According to the cloister’s web site, there are currently six monks in residence. Brother Johannes Mathias, who took in the diminutive horses, was not available to make a comment to The Local.