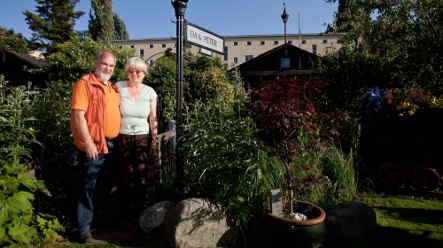 It is neatly divided into 75,165 rectangles of roughly 250 square metres each – and beautifully cared for. These are the allotments, small gardens leased from the city and cultivated by an army of Berliners for whole lifetimes. Ben Knight for Exberliner visits Berlin’s secret gardens.

If David Lynch had been German, the allotment gardens would surely have inspired him. Once you’ve seen a row of urban Schrebergärten, it doesn’t take much imagination to see a demonic glint in the eyes of those immaculately aligned gnomes.

Nor is it impossible to imagine that the genteel neurosis required to keep allotments this pristine could drive weaker souls to murder – or at least wife-swapping. Only obsessive characters with dark secrets in their tool sheds could set such standards of Prussian perfection.

Every now and then bad stories filter through to the German newspapers. In May this year, a 66-year-old pensioner in the northern town of Hildesheim clubbed three people to death over an allotment dispute. The flashpoint was a shared path, but the feud had reportedly been building for a long time, with tense threats being exchanged and rubbish being dumped over fences for years.

In another incident in April, a 78-year-old man accidentally nearly blinded a 14-year-old boy with a homemade explosive booby trap he had used to secure his shed.

These terrible stories reinforce the popular clichés about allotments in Germany: that they are insular, paranoid mini-societies full of old people with conservative attitudes. That the apples hanging over the fence are guarded jealously and there are dark mutterings if someone doesn’t clip their hedge to the regulation height.

It is exactly these prejudices that Peter Standfuß, chairman of the allotment club Am Buschkrug, is sensitive to. His colony is a cluster of 421 allotments in Britz, the genteel part of Berlin’s Neukölln district. In speaking for one of Berlin’s larger clubs near one of its poorer districts, Standfuß is a reformer – despite having grown up on an allotment colony in the 1950s.

He regularly organises children’s festivals (complete with bungee jumping) which attract 2,000 guests a year. His plans for a multicultural festival have, however, had to be shelved. Some of the older Laubenpieper, or allotment owners, are apparently not quite ready for it.

“Things are changing. Nearly every other applicant for a new allotment is from an immigrant background nowadays. We have more and more Turks, Poles, Greeks and Arabs getting allotments. It is a new challenge for some of our older allotment keepers, but it’s important, because it’s the future for allotment-keeping. I think it might be time we got a Turkish member on the board,” he said.

But Berlin’s allotment scene covers both ends of the political spectrum. Many inner-city colonies are apparently attracting new generations for various reasons. Modern parents see allotment-keeping as an antidote to the anonymity and artifice of modern society. They want to teach their kids where food comes from and – defying the clichés of paranoia – almost all allotment-owners talk about the communal atmosphere of the gardens, about colonists helping each other and lending each other equipment.

Peter Ehrenberg, chairman of the Berlin German Garden Friends (BDG), an allotment community umbrella organisation, was recently quoted as saying: “A garden demands and promotes restraint and cooperation, because you have to show consideration for others. I see that as an enrichment of our anonymous society.”

But Standfuß suspects that young people are put off by all the rules. Getting an allotment in Germany means submitting to the formidable Bundeskleingartengesetz, or federal small garden law, which is a law that defines not only the size but the purpose of allotments. To lease a plot of land from the German state, you have to use it productively. After all, you are getting it cheap – the costs rarely exceed €300 to €400 a year, though a one-off payment of a couple of thousand euros (depending on the condition of the allotment) must be paid in advance.

But new applicants find out quickly that this is a commitment that entails serious work. For instance, the Bundeskleingartengesetz contains a ‘30–30–30’ rule: at least 30 percent of the garden must be used to grow fruit or vegetables, 30 percent may be built on and a maximum of 30 percent may be used for ‘recreation’. It is also illegal to live on your allotment or to construct facilities that make it permanently habitable, which is why some German states do not allow electricity or running water. Sewage, though, is a grey area.

If the Bundeskleingartengesetz doesn’t get you, then the colony’s board might. Individual colonies have their own idiosyncratic rules. In Am Buschkrug, for example, everyone must have at least two fruit trees, while the obligatory frontal hedges must be kept at a regulation height of between 50 centimetres and 1.25 metres. The Schutzverband colony in Steglitz has the same rule and also stipulates there must be no noise between 13:00 and 15:00, or after 16:00.

But the ruling committees are more flexible than they seem and are willing to be moderate. Standfuß is eager to point out that the 30–30–30 rule can apply to the whole colony. If someone shirks their vegetable-growing duties, someone else can compensate – it all depends on the averages.

And Helmut Sonnenberg, chairman of the Schutzverband colony, offers the assurance that “if someone’s hedge is 1.30 or 1.35 metres, we don’t say anything.”

The relatively liberal standards in Berlin allotments are due to the city’s history. Created in the late 19th century as a way to curb the development of industrial slums, allotments caught on and were formalised by the German authorities in the 1920s. Their hour of fulfilment came during and after World War II, when they fed and sheltered the decimated population. Allotments took on a special significance in West Berlin, where they represented precious patches of greenery in the walled city.

These secret gardens, then, with their clay figurines, curious owners and complex rules have protected Berliners from the damage of a whole century – and are now preparing for a new generation.