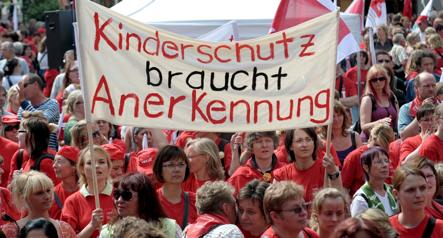 Broadcaster ZDF reported that a spokesman for the Education and Science Workers’ Union (GEW) was optimistic after the negotiations were suspended late on Saturday night. The two parties had moved closer together in the last few days, and the spokesman expected something “definite” to emerge on Sunday.

According to ZDF, the critical point of the negotiations was the salary demands of the unions.

Before this week’s latest round of negotiations, trade unions Verdi and GEW had made clear that the current strikes in Germany’s day care centres and kindergartens would be extended if the talks were unsuccessful. As well as wage increases, the educators are demanding a new health care agreement.