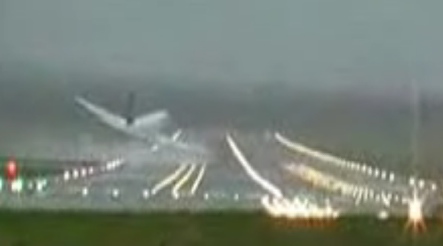 According to a report in Der Spiegel on Saturday, the German Federal Bureau of Aircraft Accidents Investigation (BFU) is now paying closer attention to the role played by the onboard computer on the A320 Lufthansa Airbus, whose wing tips scraped the runway as it was landing in high winds.

BFU investigator Johann Reuß told the magazine, “It is more complex than we thought. We are of course looking into the role played by the aeroplane itself.”

Experts had thought that a combination of unusually strong winds and a mistake by the pilot had been responsible for the incident, which was caught on film by an amateur plane enthusiast.

But the results of the investigation, which have remained secret until now, show that the A320 behaved unexpectedly as it came in to land.

The most likely apparent explanation is that the onboard computer automatically switched from flight-approach-mode to ground-mode when the plane’s wheels briefly touched the runway.

Since the ground-mode does not allow the wing-control surfaces to be manipulated strongly, which the pilot was doing to compensate for the extreme crosswinds, the computer took control of the plane and corrected the pilot’s emergency actions, causing the plane to tilt violently.

The plane was apparently being flown by the computer for three seconds before the pilot managed to re-take control and prevent a crash.

“No handbook tells you the plane will do this,” another pilot told Der Spiegel.

Airbus has stated that it will not take any action until the investigation is concluded.