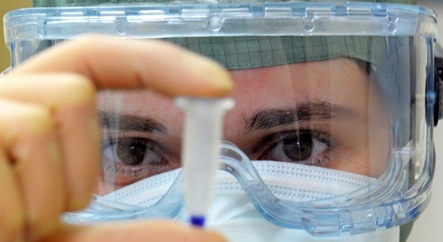 Daria Munsel, spokeswoman for the pharmaceutical giant Glaxo that is producing a vaccine against swine flu, told the magazine that studies to find suitable candidates will start in September. Several hundred people will be tested, including children, the report said.

According to Focus, the company Novartis has already begun such tests in other EU countries.

Experts say that some enhancing agents in the vaccine are slightly risky, as there is little experience with them. Only adults will be tested with the vaccine prototype in the preliminary stages.

The virologist Alexander Kekulé from the University of Halle-Wittenberg told the magazine: “The pandemic vaccine could produce more side effects than the normal seasonal flu vaccine.”

News magazine Der Spiegel warned Saturday that chaos could ensue if the state should attempt mass immunisations in the autumn.

Fifty million doses of the vaccine were ordered on Friday by various German states, enough to cover 30 percent of the population.

But according to the magazine the criteria that decide who has priority for the jab are “totally unclear.”

Chronically sick people and pregnant women are to have priority under the plan drawn up by Health Minister Ulla Schmidt, but this data is not always collected by the state health insurance companies.

It is also unclear what will happen to people without health insurance.

Another potential source of logistical problems is the funding for the programme, which according to the health department will cost €14 per person. It is still unclear if the immunisations will be coordinated by the health insurance companies or be carried out in the clinics themselves, or who will pay for the transport and storage.

The H1N1 swine flu vaccine is currently still in development, and is expected to become available at the end of September.