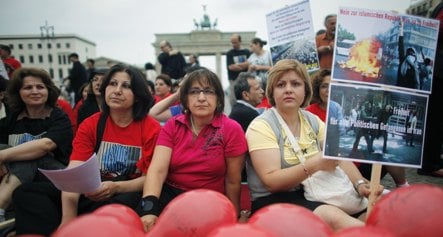 Former Iranian political detainees now living in Germany were among the protesters at the Brandenburg Gate with water bottles, hot drinks and blankets to denounce “a new wave of violence and oppression” in Iran.

“We demand the unconditional release of all political prisoners and abolition of all kinds of torture in prisons,” they said in a manifesto that also called for an end to capital punishment in the Islamic republic.

Shadi Amin, a spokesman for the hunger strikers, said the protesters also want governments around the world not to recognise Ahmadinejad’s re-election and to “put human rights ahead of economics”.

The hunger strike in Berlin was to continue through Sunday, alongside protests in other German cities including Cologne, Frankfurt and Munich over the weekend.