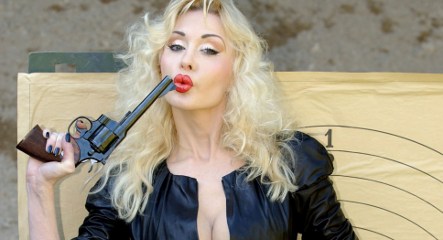 The 39-year-old, whose given name is Nora Baumberger, was informed of her candidacy while driving through a rain storm on the autobahn on Thursday.

When she received the news, Baumberger said she “almost drove into the guard rail from shock.”

“I’ve been nominated by a group whose name I’ve never even heard of,” she said, adding that the scandal could ruin her reputation after spending several years trying to establish herself as a serious artist. “I’m really irritated,” she added.

The pair apparently had a misunderstanding with the head of the UWW, Baumberger’s husband said.

“She told me that the UWW needed members. I wanted to do her a favour,” he said, adding that he and his wife had unwittingly signed a form that was actually an application for candidacy.

“That was dumb,” his wife said.

“I wouldn’t vote for me, I don’t stand for their policies,” she said, adding that the UWW couldn’t be a serious party if they’ve misused famous people’s names.

UWW spokesperson Jürgen Oelmüller said that the situation was a misunderstanding, saying the group asked family and friends to run for local positions to get their party into all of the voting districts. The Baumbergers were not on this list, he said.

Nora Baumberger needs a majority vote to gain a council seat for her district, something she said she doubts will occur.

“The people should just not vote for me!” she said.