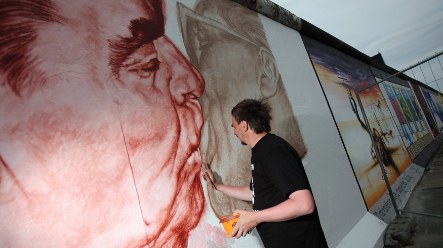 When the Wall fell in 1989, artists from 21 countries flocked to Berlin to create the world’s largest open-air gallery – a symbol of the euphoric creativity following the historic political event. But subsequent decades of weathering, graffiti, vandalism and one million visits per year had rendered the 1.3-kilometre section of the wall barely recognisable.

“After 20 years, people are looking for a monument for the reunification,” artist Andy Weiss told The Local at a recent press conference held by restoration organisers.

Check out photos of the artists’ work on the East Side Gallery.

The Artists Initiative East Side Gallery received €2.5 million from the city of Berlin and the state lottery foundation in 2008 to bring artists back to restore their works.

Now after six months, more than one-quarter of the 105 paintings that decorate the longest surviving stretch of the Wall have been revitalised, organisers said. Most of the rest are set to be complete by the anniversary on November 9.

Weiss is joined by other artists already in Berlin from around the world, including chairperson for the initiative Kani Alavi, Thierry Noir, Giampaolo Talani and Dmitrij Vrubel. Through international contacts in 22 countries, 91 of the 118 original artists have agreed to return to their works in Berlin. Six of the original artists have died and one was unreachable.

Each artist has been given €3,000 to cover travel expenses, lodging and food. But several of the foreign artists have criticised the amount, saying it’s not enough. Some artists declined to consider the restoration altogether.

“Those people have no emotion here,” one returning artist said of their choice.

For Moscow painter Dmitrij Vrubel, who brushed the well-known “Brother Kiss,” depicting Soviet leader Leonid Brezhnev’s kiss with East German strongman Erich Honecker on the east side of the wall in 1990, the emotion was too great to turn down.

“My work helped me to love and the first time, I did it for me. Now, I’m making an icon,” he said during the conference.

According to Vrubel, the original painting was destroyed sometime in 1994, which he noticed on a return trip to Berlin in 1996. He worked for some three weeks to complete the restoration.

Other artists will also try to recreate the same emotion, which could prove difficult, organizers said.

For the parts of the wall that will not be repainted, organizers said they will try to remove all graffiti and evidence of vandalism in an attempt to preserve what remains.

The project’s long-term concern is the permanent protection of the art. Accordingly, a ban against graffiti will be placed on East Side Gallery upon its completion.

Organizers warned that East Side Gallery fans should expect small changes to these paintings, some of which have been gone for years.

“After 20 years, I might even be able to make some things better this time,” Vrubel said.