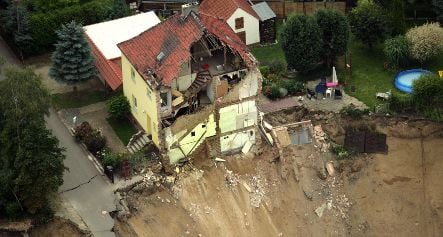 A resident of the Auf der Halde neighbourhood reported sink holes in his garden to the public prosecutor’s office in Magdeburg, the paper said. The “hollows” were filled, but the ground sank again.

“It was apparently not taken seriously,” public prosecutor Uwe Hornberg told the paper.

Auf der Halde was sold directly to private customers in 1993 and 1994 from the Mibrag coal mining company, the paper reported. The nearby community of Nachterstedt where the landslide occurred was not included in the sales and belongs to Seeland, a mining development company.

Authorities in the state of Saxony-Anhalt have hired an independent engineering firm to analyse the cause of Saturday’s landslide. Three people are still missing after one and a half homes near Nachterstedt collapsed on Saturday with the ground beneath them and slid into Concordia Lake, a former open-pit mine filled with water.

What caused the collapse is still not yet known, but some officials believe there might be underground mines around the lake. Authorities have warned of further landslides and put a strict prohibition on use of the lake, which was a coal mine between 1865 and 1990, then flooded in the mid 1990s.