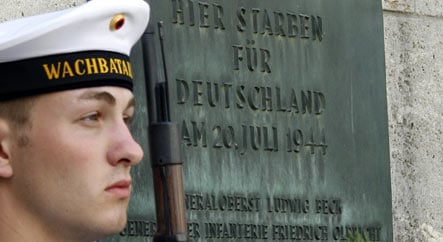 The July 20 plot, as it has come to be known, was led by an aristocratic, one-eyed army officer called Count Claus von Stauffenberg, portrayed recently by Hollywood actor Tom Cruise in the film “Valkyrie.”

Stauffenberg hid a bomb underneath a table in Hitler’s headquarters in East Prussia, in present day Poland, made his excuses and left the room. Hearing the explosion, he assumed Hitler was dead, left the compound and flew to Berlin to put into practice “Operation Valkyrie” to arrest Hitler henchmen like propaganda chief Joseph Goebbels and SS head Heinrich Himmler.

Co-conspirator Philipp von Boeselager was meant to return from the Eastern Front with 1,200 men and overthrow the clique at the head of the Third Reich terrorising the world. But although the explosion killed several people, Hitler survived.

By chance, an officer had moved the briefcase containing the explosives behind a sturdy leg of the oak table, meaning the dictator escaped with only slight injuries – and a ruined pair of trousers.

Confusion reigned 700 kilometres (435 miles) away in Berlin, with conflicting information about whether Hitler had survived the attack, but it soon became clear that the plot had failed.

Stauffenberg and several others were executed the same evening in the courtyard of the Bendlerblock, part of a complex of buildings where the plot was hatched and which today houses offices of the German Defence Ministry.

In revenge, Hitler unleashed a campaign of terror that would see hundreds of people arrested and executed because of suspected involvement in the plot, including their families.

Boeselager – who supplied the explosives and who was involved in another plot to kill Hitler and Himmler in 1943 – did an abrupt about-turn and returned to the front, and was in constant fear of discovery.

“It was clear to me that I would be taking my cyanide pill the next morning,” he told the Frankfurter Allgemeine Zeitung in his last interview before his death in May 2008. He was the last surviving member of the group.

The conspirators became martyrs of the German resistance whose memory has been carefully tended in the postwar years. That the plot failed is seen as one of the tragedies of World War II since millions more people were killed on the battlefield and in the gas chambers before Hitler was defeated in 1945.

Defence Minister Franz Josef Jung led a wreath-laying ceremony on Monday at a memorial in the Bendlerblock courtyard.

Later on Monday, Economy Minister Karl-Theodor zu Guttenberg spoke at a commemoration at the Plötzensee memorial in the north of Berlin, a former prison where around 90 people suspected of involvement were executed.

Although the plot has been filmed before, Cruise’s film ruffled feathers in Germany where people feared the story would get a heavy handed Hollywood treatment and because of the actor’s membership of the Church of Scientology.

Authorities initially denied permission to film at the Bendlerblock but eventually relented and Berlin even subsidised the film to the tune of €4.8 million ($6.9 million).

The film, directed by Bryan Singer and released in Europe in January, was panned by most critics in Germany but reviewers elsewhere were kinder and it notched up respectable box office receipts.