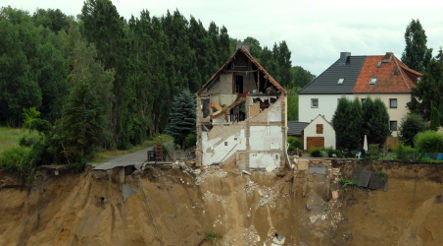 “We cannot yet rule out another landslide from happening,” said Uwe Steinhuber, a spokesman for the Lausitz and Middle German Mining Administration (LMBV).

Rescue crews are still looking for the three people missing after a house near Nachterstedt collapsed with the ground beneath it. But the couple and another man between the ages of 48 and 51, are believed to have not survived the accident. Another part of a house also slid into Concordia Lake.

“So far, all search efforts have not yet revealed the locations of the living or not-living persons,” sad the district administrator of the Salzland area, Ulrich Gerstner, adding that as a final resort, the town has considered calling in the army for assistance in the search.

What caused the collapse is still not yet known, but some officials believe there might be underground mines around the lake.

“All we have right now is speculation,” Steinhuber said, adding it could take months to find out what happened.

For the time being, authorities have put a strict prohibition on use of the lake.