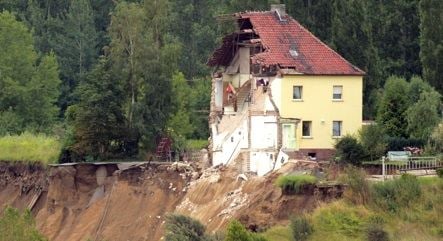 The three people missing after the accident, a married couple and a man, are all residents of the semi-detached house, a spokeswoman for the district municipality told reporters. The house had been standing some 120 metres from the shore.

Half of another house has also slipped into the lake, once an open-pit, German media reported.

There is some doubt whether one of the missing people, a 50-year-old man, was in the house at the time of the landslide, but authorities are assuming that all three were asleep when the accident occurred.

Police were informed of the landslide at 5:40 am by an inhabitant of Nachterstedt, near Magdeburg. According to a report, a piece of land 350 metres long and 120 metres wide had collapsed. An entire street had also tipped into the nearby Lake Concordia.

The danger of further landslides prevented rescue workers from reaching the wreckage of the house, which was completely submerged under water.