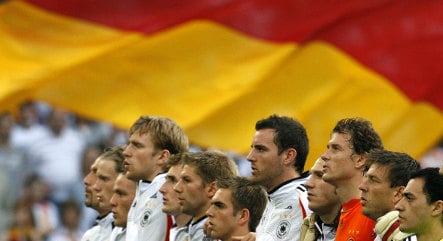 All together now, boys. Photo: DPA

According to the survey carried out by pollster Emnid for Daheim magazine, only 47 percent of all Germans can sing along to the Deutschlandlied written by Joseph Haydn in 1797.

Of the 1,003 people surveyed, there was considerable geographic disparity in familiarity with the lyrics penned by August Heinrich Hoffmann von Fallersleben in 1841 to accompany the music. Whereas 51 percent of western Germans knew them, only one-third of those from the country’s formerly communist eastern half did.

Ironically, because of Germany’s disastrously nationalistic past, Germans only have to remember one of the anthem’s three stanzas. The first of these, with its famous “Deutschland über alles” line, had to be scratched because it mentions the former borders of the German Reich stretching from the Meuse River in the west to Neman in what was once East Prussia.

And though the song was considered revolutionary liberal in the 19th century, the second stanza got axed for mentioning the inspiration of “German women” and “German wine.” The references to unity, justice and freedom in the last stanza, however, still fit nicely with modern, democratic Germany.