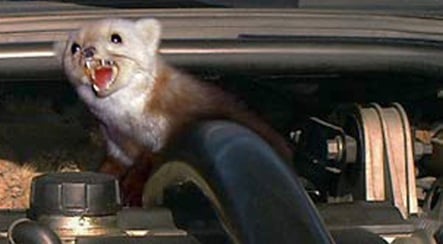 The nocturnal omnivores, also known as beech martens, live near developed areas and tend to mark vehicles with their scent during mating season.

“During the mating season between July and August they make a nuisance of themselves in a loud Rambo manner,” a DJV statement said.

Because cars frequently move to new locations, they take the scent of other martens to new habitats, provoking a rivalry for other nearby martens.

“Vicious bite attacks are the result,” the statement said.

In 2007, stone martens cost car owners an estimated €40 million in damages by chewing through cables and wires in engines.

The DJV recommended frequent car washes to remove the animals’ scent, especially if they have caused damage to the car in the past.

Some automakers also offer a preventative system that delivers small electric shocks near the car engine if martens try to get too close.