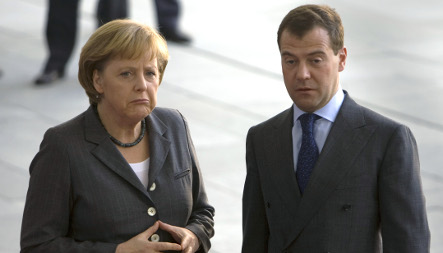 Merkel and Medvedev will hold private talks near the southern city of Munich before being joined by key members of both governments, including the ministers for the interior, economy, environment and education, Berlin said.

“The talks will encompass the most important foreign policy questions, such as Iran, North Korea’s nuclear programme, the Middle East peace process, as well as economic topics, such as the financial crisis and the read-out from the G8 meeting,” Merkel’s spokesman, Ulrich Wilhelm, said this week.

“They will discuss a wide range of issues, including on security, gas and economic issues,” said a Kremlin official on condition of anonymity.

In addition, a host of interministerial agreements were to be signed, covering security and transportation among other issues, she added, according to preliminary information.

Nevertheless, with Germany by far and away Europe’s biggest customer for Russian gas, the topic of supplies will likely top the agenda, analysts said, with Merkel seeking assurances that a repeat of the gas crisis in January does not occur.

Russian supplies to much of Europe were cut off as part of a payment dispute between Moscow and Ukraine, which had a brutal effect on Germany during a bitterly cold winter.

Timofyev Bordachyov, director of the Centre for Comprehensive European and International Studies in Moscow, said the issue of Ukraine as a transit country for Russian gas would certainly play a part in the talks.

“Russia and Germany understand each other here, both want to reinforce Ukraine as a reliable transit country for gas deliveries to Europe,” Bordachyov told AFP.

Alexander Rahr, a Russia expert with the German Council on Foreign Relations, said: “We expect new problems coming up, so we will definitely see gas coming up as an issue.”

Only three days before the Munich talks, the EU signed an agreement on a pipeline it hopes will reduce its dependence on Russian gas. This Nabucco pipeline is a rival to the Nord Stream project – led by state-controlled Russian gas giant Gazprom – which would pump natural gas from Russia under the Baltic Sea to Germany.

As Russia’s largest trade partner, the vexed issue of Russia’s plan to seek WTO entry as one customs union with Kazakhstan and Belarus could also play a part in the talks.

The bid, which, according to a senior EU official has “seriously hampered” negotiations on a new Russian-EU partnership pact, has already been dismissed by the United States and leaves the prospect of Moscow’s WTO accession in doubt.

Rahr said relations between the two countrues had improved markedly since Medvedev took the helm in the Kremlin from Vladimir Putin, now prime minister.

“They are almost back to where they were now. Merkel has shown she can work together with Medvedev,” he told AFP.

Aside from gas and trade, the two countries will be aiming to cement their “close co-operation” on a host of issues, Wilhelm said.

And Bordachyov said bilateral relations between the pair would also receive a boost from the agreement between Moscow and Washington on nuclear disarmament earlier this month.

“The improvement in Russian-US relations is a plus for the Russian-German relationship, because Germany always looked with nervousness at the tensions between the Russians and the Americans,” he said.