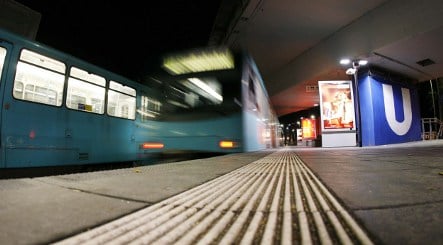 Around 1:40 am, police and firetrucks responded to a call about the man’s Opel that was stuck in the public transport tunnel between Hans-Böckler-Straße and Willy Brandt Platz in Bochum in North Rhine-Westphalia.

The driver had drunkenly driven down the tunnel where the train goes from above ground to below the street and not realised what he had done. He told police he was simply trying to get to downtown Bochum after seeing a movie.

“It seems he didn’t notice something was wrong with the road underneath his car,” police spokesman Frank Plewka told The Local. “When he did realise where he was, he had to call the fire department to help get his car out.”

At the time, the underground train line was no longer running for the night and the man did not encounter any other traffic in the tunnel.

The man was uninjured but caused €2,000 in damages to his car. The tunnel was also damaged, but the total cost to repair it is still not known.

“The whole thing reminded me of an old Opel advertisement that said the car ‘drives like it’s on rails.’ He may have been testing that claim,” Plewka said.

Police took away the man’s licence and a blood test was taken to determine how drunk he was.

Plewka added this isn’t the first time a car has taken a wrong turn into the subway tunnel, but none have ever gone so far without realising the car was on tracks instead of road. A few blocks away, cars have also mistaken a passenger entrance into the metro station for a driveway into an underground parking lot.