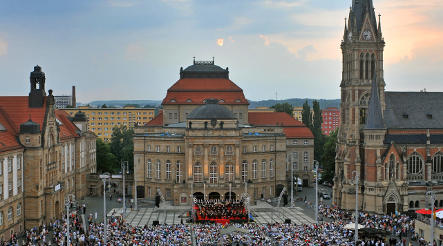 This city 200 kilometres (120 miles) south of Berlin near the Czech border got the dubious honour only after the first choice, a steel centre on the Polish frontier, was hastily christened Stalin City upon the death of the Soviet leader that year.

And when the Berlin Wall tumbled 20 years ago, the rest of Germany saw Chemnitz, best known for its gargantuan Marx bust and the sputtering Trabant cars built down the road, as a “city of losers” with little future in the brave new world that awaited.

Chemnitz has long been a grim symbol for the depressed region, forever in the shadow of nearby Dresden, a Baroque jewel that Chancellor Angela Merkel handpicked to show US President Barack Obama last month as a symbol of eastern renewal in this anniversary year.

In the past decade, however, Chemnitz has quietly managed to build on an industrial tradition reaching back 150 years to re-establish the area as east Germany’s top manufacturing centre.

The city’s charismatic mayor Barbara Ludwig told AFP over lunch at a former textiles factory converted into a chic cafe that it was nevertheless often an uphill battle convincing outsiders of the 850-year-old city’s charms.

“They looked at Chemnitz like Cinderella,” said Ludwig, who has run the city of 240,000 people since 2006. “But I always say, you have to read to the end of the fairytale. Cinderella ends up marrying the prince, doesn’t she?” the 46-year-old said with a grin.

Thanks to a thriving textiles industry, Chemnitz was a medieval boomtown and later became a cradle of Germany’s industrial revolution in the 19th century, drawing comparisons with Manchester.

A century and a half later, the fall of the Iron Curtain was particularly hard on a city that had relied so heavily on manufacturing and boasted 460 belching smokestacks in its heyday.

Unemployment soared, the gloomy pre-fabricated buildings of the city-centre cast a pall compared to the charming old towns of its bigger and richer neighbours Dresden and Leipzig, and neo-Nazis gained a foothold.

Chemnitz seemed more a Cold War relic than a town equipped for the future – it served as the setting of the 1983 James Bond thriller “Octopussy” and the more than seven-metre-tall (23-foot-tall) bronze Karl Marx bust was its trademark.

Meanwhile neighbouring Zwickau, the birthplace of East Germany’s smog-spewing Trabant, went bust as well and dragged its corner of Saxony down with it.

The two cities became the butt of snide jokes about the backwater east. But few are laughing now.

Volkswagen, ThyssenKrupp, Continental, Siemens and IBM have all set up operations here, with VW alone employing more than 7,000 people. Ludwig said even the economic crisis has brought no major job cuts.

‘It never gets boring’

Chemnitz and Zwickau are now cranking out car parts again and a cluster of high-tech campuses are managing to retain many of the 10,000 students from Chemnitz’s Technical University rather than lose them to the west.

“We did not have to start from scratch getting companies to move here,” said Jenz Otto of the €14-million Technology Center Chemnitz, a sparkling new campus for startup firms specialising in microsystem technology.

“We were able to pick up where we left off before communist times.”

Companies cite Chemnitz’s location at the heart of the European Union, healthy infrastructure and relative lack of red tape as factors that drew them.

“The Chemnitz-Zwickau axis has received only a fraction of the subsidies that (neighbouring) Dresden and Leipzig have enjoyed since 1990 but is today the biggest industrial metropolitan area in Saxony,” it wrote.

And a sumptuous century-old opera house, a stunning new Expressionist art museum and even a first-ever show of paintings by rock legend Bob Dylan have drawn connoisseurs from far and wide.

But despite the dramatic progress, not all is rosy in Chemnitz.

Unemployment is stuck at around 13 percent, which though far lower than the 20 percent posted in 2000, is comprised of thousands of long-term jobless.

Chemnitz also lost more than 20 percent of its residents between 1990 and today, above all the young and ambitious with marketable skills, and the birth rate is only gradually recovering from a near standstill after the Wall fell.

“Half of the people I went to school with now live in the west,” Ludwig said.

The far-right has also made serious inroads, with two extremist parties represented on the city council and neo-Nazi chants a common occurrence at local football matches.

“What is particularly worrying in the east is the fact that the far-right has anchored itself in the local political scene,” said Petra Zais, who runs mobile teams of advisors dealing with the issue.

Ludwig says Chemnitz takes the problem seriously but sharply rejects the notion that the region’s tumultuous history makes it destined to remain a hotbed of extremism.

“Chemnitz has an underlying tension that means it never gets boring – other cities are rooted in the past or have a certain arrogance,” Ludwig said, offering a passionate defence of the city.

“You can see it in the city’s facades – nothing is hidden. You can see the ruptures the city has gone through” from industrialisation, the world wars, communism and its aftermath. And the people who grow up in such an atmosphere or come to seek it out are often the ones with the most interesting plans.”