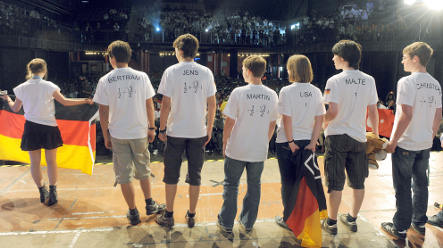 The event celebrated its opening ceremony on Tuesday, with Chancellor Angela Merkel welcoming the teams from 105 different countries around the world via video. Over the next eight days, students will determine the absolute value of their education to determine their order of magnitude.

“Strong math skills are invaluable when it comes to garnering future opportunities in the working world,” said Bremen state secretary of education Andreas Storm in his welcoming address to the students.

Each team can have as many as six team members compete in various mathematical fields. All students must be under 20-years-old and have no university training. Representing Germany are five boys between the ages of 16 and 19 as well as one 16-year-old girl.

To qualify, each student must complete two tests with three problems from different areas of mathematics, such as geometry or number theory.

The Olympiad started in 1959 in Romania, as a competition that only Soviet-occupied countries took part in. This year, students from Albania to Zimbabwe will be crossing their digits to take home the gold.