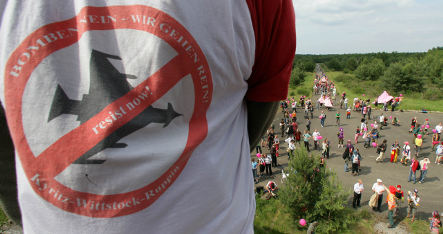 “We’re in a real quandary now and have to quickly find an alternative to the bombing range in Krytiz-Ruppiner heath,” an air force spokesperson said.

Local interest groups stalled the project on the state border for 17 years with 27 lawsuits, opposing its use as a training ground for some 1,700 missions involving low-flying military aircraft each year, which would also involve bombing runs. Last week Defence Minister Franz Josef Jung said that the government would not appeal a recent decision by the Berlin-Brandenburg administrative appeals court (OVG) against project.

Now military officials are looking east, to western Poland, in the scramble to find a new location close to home. Despite history, Polish officials are reportedly open to the idea and German officials would welcome shorter flights to the training station.

Jung has said that finding a place for the Luftwaffe to get hands-on experience is critical for Germany’s security. A member of Chancellor Angela Merkel’s Conservative Christian Democrats (CDU), he rejected the suggestion that the pilots be trained on simulators.

“When you get your driver’s license, after time in the classroom, you have to take the wheel of a car and drive in traffic,” one pilot told press agency DDP.

The Luftwaffe has plans for two other two sites similar to the controversial Bombodrom – one near Siegenburg in Bavaria, and Nordhorn in Lower Saxony. The latter has already garnered high-profile critics like state premier Christian Wulff, also from the CDU, who has called for more training with simulators.

Like those who protested the “Bombodrom,” the mayors of Nordhorn and Siegenburg worry the exercises will drive away tourists and damage the environment. Lower Saxony has already filed one law suit against the air force to stop further development of the Nordhorn range, where the military plans to do 318 exercises annually. And while Bavaria doesn’t plan to follow suit, the Siegenburg mayor plans to make an official complaint against more than the planned 95 training events per year.

The Warsaw Pact deemed any flight lower than 30 metres an element of war, which pushed the air force to train in Goose Bay, Canada, in the 1970s. The air force stopped using those grounds in 2006 in hopes that the “Bombodrom” would soon be available.

Since 1960, German pilots have also flown to the southern tip of Sardinia near Decimomannu for over-water exercises, but the military wants a training ground that will give pilots the feel of flying over the land they are meant to protect. In 1996, some German pilots also began training in the US state of New Mexico at the Holloman Air Force Base, but there, dropping bombs isn’t possible.

This spring, German air force pilots will get the opportunity to train over more than 61,000 square kilometres in exercises in the United Arab Emirates.

But as travelling to international training ranges gets more expensive as the price of fuel goes up, the defence minister will continue pushing for a place to train closer to home.