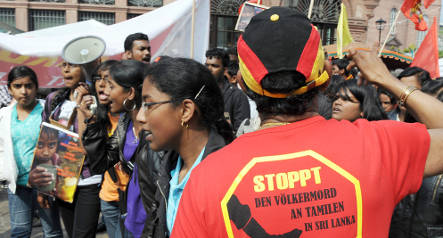 Tamils in Frankfurt at the May train station protest. Photo: DPA

“He is responsible for the death of thousands of civilians, the rape of women and displacement of hundreds of thousands,” one protestor told daily Bild as protestors marched to the US Consulate to present a petition to the Americans against the appointment.

The Sri Lankan government declared victory over the rebel Liberation Tigers of Tamil Eelam (LTTE) in May. The group – deemed a terrorist organisation by the EU and US – had waged a long-running civil war against the Sinhalese-dominated government in hopes of establishing an independent state for Tamils, who make up 18 percent of the country’s population.

Some Tamils allege that Dias, commander of the Sri Lankan army 57th Division, is among those responsible the high civilian death toll and should not serve in a diplomatic post in Germany.

But an official at the Sri Lankan embassy in Berlin told The Local on Tuesday that the Tamil claims are false.

“These are just unsubstantiated allegations by LTTE sympathisers,” he said. “They have staged a lot of protests in the past few months and now there is no reason for them to protest so they found something new to talk about.”

Human rights advocacy organisation Amnesty International spokesperson Renate Müller-Wollemann told The Local they were researching the case and could not confirm or deny whether Dias is suspected of any war crimes.

“We do know that both sides were involved with atrocities,” she said.

After the Sri Lankan government declared victory over the Tamil Tigers this spring, some 600 Tamils blocked traffic at the Frankfurt train station in protest of the final offensive, forcing German national railway operator Deutsche Bahn and police officers to stop train traffic.

According to Bild the State Office of Investigation (LKA) is currently conducting “risk assessment” for further Tamil protest actions.

The Sri Lankan embassy official told The Local that his country believed the protesters were using the events to raise funds for the terrorist Tamil organisation.

He said Dias is expected to arrive at his new posting in Berlin soon.