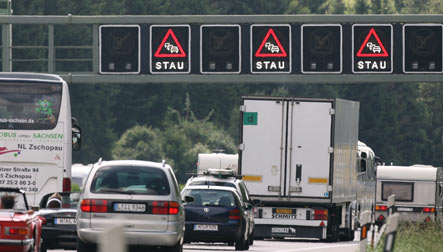 According to the Tuesday’s edition of the daily Saarbrücker Zeitung, 104,251 traffic jams occurred around Germany from April 2007 to April 2008, lasting approximately 180,000 hours in total.

This is the first year the federal institute for highways and roads have kept track of the national numbers of blocked traffic.

Most standstills on the road are caused by construction, high density traffic and car accidents. Motorist association ADAC estimates the average German driver spends about 60 hours a year in traffic jams. German drivers are also 50 percent more likely to get into an accident as traffic density increases to a standstill.

And that number is growing due to Germany’s national stimulus package, which designated €550 million to the various states for road improvements in 2009 alone. More than 250 building sites are currently in progress around the country, covering nearly 1,000 kilometres of roadway.

ADAC is warning roadtrippers to be especially aware of major construction happening around Nuremberg on the A3 to Frankfurt, on the A6 to Mannheim and Heilbronn as well around the A9 to Munich. Travellers in Bavaria are also advised to avoid the A99 around Munich and the A8 between Munich and Stuttgart.

Adding to the congestion is the official start of summer for many students starting next week when 14 of Germany’s 16 states end the school year.