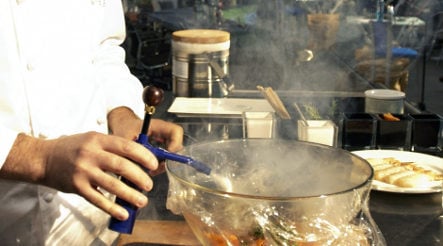 The 24-year-old man from Stahnsdorf near Berlin somehow obtained some of the dangerous chemical and was poised to try out a new recipe from the school of molecular cooking, which aims to apply scientific processes to gastronomy.

There was an “enormous explosion,” according to the Berliner Morgenpost daily. The would-be Heston Blumenthal – a leading proponent of molecular gastronomy – lost one hand in the explosion and the other was so badly injured it had to be amputated.

The man, who was staying at his girlfriend’s mother’s house, was rushed to hospital where his condition was described as life-threatening. He is on artifical respiration.

“Criminal investigators secured the remains of a nitrogen flask, bits of clothing, flesh and bits of skin,” the paper said.