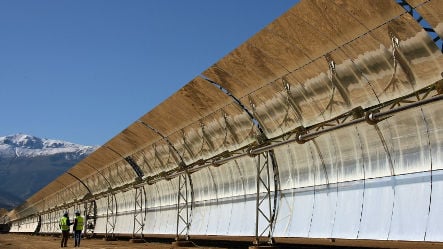 The consortium says the massive project could provide up to 15 percent of Europe’s electricity needs by 2050.

Engineering giants ABB and Siemens, energy groups Eon and RWE along with financial institutions Deutsche Bank and Munich Re are among the German companies that signed a protocol in Munich.

“Today we have taken a step forward [towards the project’s realisation]”, said Nikolaus von Bomhard, head of the reinsurance giant Munich Re, which hosted the signing.

The Desertec Industrial Initiative (DII) would build solar-power generators in North Africa and the Middle East to send huge amounts of electricity to Europe. It would also provide a “substantial portion of the power needs of the producer countries,” the group said in a statement.

Munich Re board member Torsten Jeworrek said the European companies involved had pledged to work “as equals in a sincere and fair” manner with the producer countries.

For Jordanian Prince Hassan ibn Talal: “The partnerships that will be formed across the regions as a result of the Desertec project will open a new chapter in relations between the people of the European Union, West Asia and North Africa.”

Under the protocol, a Desertec study office to be established by October will have three years to elaborate investment plans to create the network of solar farms.

Representatives of the Arab League and the Egyptian energy ministry were also at the signing of the protocol.

Under the terms of a memorandum of understanding (MoU), the study bureau will be charged with “drafting of concrete business plans and associated financing concepts, and the initiating of industrial preparations for building a large number of networked solar thermal power plants.”

Other companies involved are the Spanish firm Abengoa Solar and the Algerian conglomerate Cevital as well as several German banks and engineering companies. The Süddeutsche Zeitung newspaper reported in June that the first electricity could begin flowing to Europe in 10 years.

It quoted a Siemens spokeswoman as saying that the solar farms could generate up to 100 gigawatts of electricity, the equivalent of 100 power plants.

Max Schön, president of the German association of the Club of Rome, said in the Desertec statement: “The establishement of DII is a giant leap by industry for the lasting production of human life.”