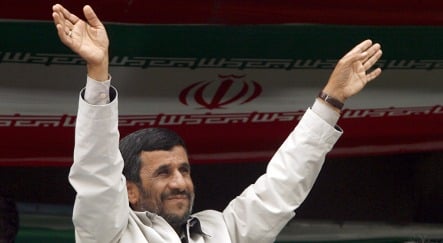 “The judge, the jury and the German government are responsible in this case,” Ahmadinejad was quoted as saying on the website of a state broadcaster.

The official IRNA news agency also quoted him as blaming US President Barack Obama and other international leaders for “not reacting” to the murder of Marwa al-Sherbini.

“We have not seen any reaction from (Barack) Obama, other European leaders or the secretary general of the UN. We ask them to condemn Germany,” Ahmadinejad said. “When there is a small incident in a country which is opposing them, they adopt resolutions against it, but they do not respect the minimum rights of people in their own countries.”

Sherbini was stabbed at least 18 times in the courtroom in front of her husband and three-year-old son on July 1 by a Russian-born German man who has since been charged with her murder.

On Saturday, around 150 Iranian Islamist students pelted eggs at the German embassy in Tehran and chanted “Death to Germany! Death to Europe!”.

On Friday, Iran had summoned Herbert Honsowitz, Berlin’s ambassador to Tehran, and protested against the murder and urged Berlin to step up efforts to protect the rights of the minorities there.

Muslim groups have dubbed Sherbini’s death as the “veil murder” and her killing drew thousands of mourners at her funeral Monday in Alexandria, Egypt.

Sherbini’s husband, geneticist Elwi Ali Okaz, is in a critical condition in a hospital after he too was stabbed by the assailant and also shot in the leg by confused police who took him for the attacker.

The unemployed 28-year-old attacker, identified only as Alex W., was in court appealing against an earlier conviction and fine for calling Sherbini a “terrorist” for wearing the Islamic headscarf during a dispute.