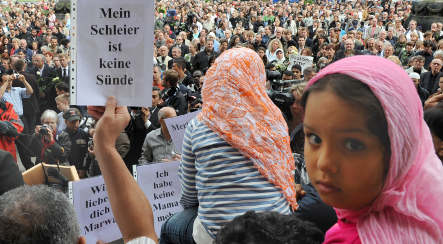 Marwa Al-Sherbini, 31, was knifed at least 18 times, while her husband Elwi Ali Okaz was also injured while trying to protect her. Police officers who thought he was the attacker shot him in the leg and he remains hospitalised while their three-year-old son is being cared for by relatives.

Her killing, and the lukewarm reaction to it in Germany, sparked outrage among the German-Muslim community, in Egypt and beyond.

Al-Sherbini had been in court to testify against a 28-year-old Russian-German man who was appealing a fine for calling her an Islamist and terrorist for wearing a headscarf during an argument at a children’s playground.

Thousands of mourners attended her funeral in Alexandria, Egypt on Monday, and many are taking her death as an illustration of latent racism or anti-Islamism in Europe, asking what the reaction would have been in Germany had she been Jewish.

Egyptian President even raised the subject with Chancellor Angela Merkel during the G8 summit in Italy last week, asking her to ensure the killer was brought to justice.

A number of regional politicians attended the commemoration in Dresden on Saturday, while Franz Müntefering, head of the Social Democratic Party (SPD), was also there, calling for more political action against racism while warning against instrumentalising Al-Sherbini’s death.

Those present laid flowers in front of a large picture of the dead woman while Aiman Mazyek, secretary general of the Central Council of Muslims in Germany said Al-Sherbini’s murder marked a new dimension in violent Islamophobia and called for a strong but peaceful reaction.