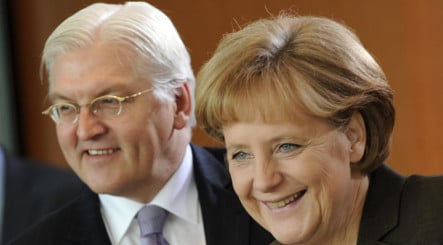 Have to stop being friendly at some point - Steinmeier and Merkel Photo: DPA

“Neither of the parties that formed the grand coalition can distance themselves completely from what they have done together,” Foreign Minister Steinmeier, chancellor candidate for the Social Democratic Party (SPD) told the foreign press association on Friday.

“I cannot say – and neither can Frau Merkel – that everything we achieved these last four years was bad,” said Steinmeier, who serves as Merkel’s vice-chancellor in the coalition government with her Christian Democratic Union (CDU).

“The election campaign begins at the start, or middle of August and then the voters will realise who has what to say, and who has the answers for the future. Then they will see that the Union has nothing but cotton wool to offer.”

Müntefering said Steinmeier would certainly become chancellor. “He knows he can do it. He will do it.”

Yet the SPD have their work cut out for them – a poll released this week by the independent Forsa institute showed the SPD trailing Merkel’s conservative Christian Union bloc with 21 percent support to 37 percent.

If the election were held this Sunday, Merkel would be able to dump the SPD and form a ruling majority with their preferred partners, the pro-business Free Democrats, the poll indicated.

Merkel has managed to appear an adept manager of the crisis in Europe’s biggest economy as it faces its worst recession since World War II, despite criticism that she was slow to react to the precipitous downturn.

Meanwhile Steinmeier, who was the architect of biting labour market reforms under Merkel’s predecessor Gerhard Schröder, has found it difficult to sell himself as a fierce defender of German jobs in tough times.

The SPD seems to be toying with the idea of making nuclear power a main issue of the election – serious problems with the Asse nuclear waste storage facility and repeated scandalous difficulties with the Krümmel nuclear power station have made the subject news recently.

Müntefering criticised what he said was the pro-nuclear stance of the CDU. “The Union is playing down the dangers, and wants to kill off the nuclear agreement. We will make sure that the nuclear agreement is implemented – to gradually get out of nuclear power. The problematic old power stations by the end of the next legislature period, Krümmel immediately.

“What is going on in Krümmel stinks to heaven. I can only say – turn the thing off. Vattenfall does not seem capable of running this nuclear power station properly. The people are concerned, and rightly so.”

Müntefering, 69, also confirmed to the weekly magazine he was in a relationship with the 29-year-old Michelle Schumann, who works in his office.

Commenting on the age difference, he said it had always helped him to be around younger people. “It is an enrichment. One gets to know a different view on things when different life experiences mix. One must be prepared to learn from the other and remain curious.”