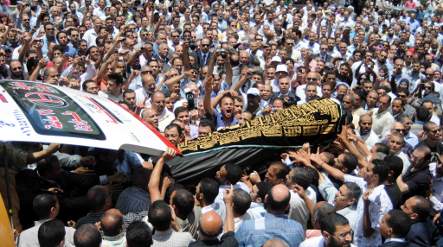 Marwa al-Sherbini was stabbed at least 18 times in a courtroom in Dresden on July 1 in front of her husband and three-year-old son by a Russian-born German man who has since been charged with her murder.

With Berlin under fire for a slow reaction to the killing, the German government’s integration tsar Maria Boehmer visited his bedside on Friday, a day ahead of a planned memorial ceremony outside Dresden city hall.

Dubbed the “veil murder” by Muslim groups, the killing drew thousands of mourners to her funeral on Monday in Alexandria, with Egypt’s top cleric declaring her a “martyr” and demanding the maximum penalty for the attacker.

The 31-year-old’s husband, geneticist Elwi Ali Okaz, is in a critical condition in hospital after also being stabbed by the assailant and shot in the leg by confused police who took him for the attacker.

Accompanied by Egypt’s ambassador to Germany and the president of the German-Arab Association, Boehmer said: “There is no place for racist or religious violence in Germany.”

“The German government sets great store by integration. We see variety as an opportunity … Germany is not anti-Islam,” she added.

“We want to make sure that everyone in Germany feels safe, whatever their origin, their nationality or their religion. Racism and Islamaphobia have no place in Germany,” Steinmeier said.

The unemployed 28-year-old attacker, identified only as Alex W., was in court appealing against an earlier conviction and fine for calling Sherbini a “terrorist” for wearing the Islamic headscarf in a dispute in a playground.

German Chancellor Angela Merkel spoke with Egyptian President Hosni Muburak about the killing in L’Aquila, Italy, on Thursday where world leaders gathered for a Group of Eight meeting.