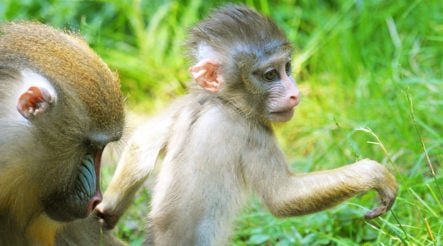 The mandrill formerly known as Obama in May with his mother. Photo: DPA

This spring the zoo in the eastern German city named a newborn mandrill “Obama” after freshly inaugurated US President Barack Obama. But an advocacy group for black Germans demanded that the primate be renamed this week, calling the zoo’s choice racist.

“It’s a catastrophe,” director of the Initiative for Black Germans (ISD) Tahir Della told The Local on Friday. “Black people continue to be confronted by associations with the animal kingdom and primitivity.”

The baby mandrill, which belongs to a species closely related to the baboon, was born on March 23, Manuela Collmar, zookeeper at the zoo’s “Afrika Haus,” told The Local earlier this week. Each year the zoo names all newborn animals beginning with the same letter.

“This year they all begin with ‘O,’ and one of the zookeepers chose ‘Obama’ – it was meant to be positive and an honour in light of his visit to Dresden in June,” Collmar said, adding that neither she nor her colleagues were aware of the history of using monkeys to caricature and ethnically stereotype black people.

In an email response to ISD director Della’s complaint about the mandrill’s name on Thursday, zoo director Karl-Heinz Ukena echoed her sentiments.

“The possible associations of this name choice were not considered, and the racist charicterisation – particularly with the background that the US president recently visited Dresden – was far off,” Ukena wrote, adding that the zoo had meant to express its “esteem” for Obama.

Ukena went on to apologise for any “irritation” the name had caused.

The ISD responded with a request for the zoo to take the issue seriously and rename the mandrill.

The request at first went unanswered, and calls on Friday to the zoo revealed that Ukena had left his office on holiday.

However, later the same day, the zoo told The Local it had reconsidered and would rename the baby primate.

The zoo director was contrite about any possible offence taken, his secretary Annette Heine said.

“We will change the name to ‘Okeke,’ which means ‘he who was born on market day’,” she said.

Munich-based Della said he was surprised by the zoo’s change of heart, calling it a “small miracle.”

He said he has made “countless” similar complaints that have been repeatedly brushed aside.

“Most people think it’s enough to qualify offensive content by saying they didn’t mean it that way,” Della told The Local. “For a long time racism has been associated with the Third Reich, but Germans need to understand that there are other forms. There are so few black people in the country, however, that they see it as a small problem.”

The Dresden Zoo’s choice of the name ‘Obama’ for the mandrill is a sign of what Della calls a “subliminal racism” that exists in the country.

Living in a less diverse society than in the United States, Germans have often struggled to avoid racial pitfalls and cultural insensitivity. Earlier this year a company was criticised for selling chicken nuggets called “Obama Fingers,” in an apparent reference to African-American fondness for fried chicken.

But there have also been gaffes in America.

This February, The New York Post was slammed for running a political cartoon showing police officers shooting a chimpanzee while saying: “They’ll have to find someone else to write the next stimulus bill,” just as Obama was having difficulty with the US Congress on efforts to boost the economy.

The paper said it had not intended to appear racist and was merely referencing a recent incident with a violent chimp in Connecticut.