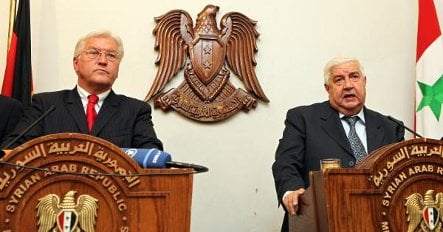 “Syria has an objective interest in the success of the Middle East peace process and I call on Syria and also my counterpart Mr. Muallem to do its part,” he said at a joint press conference in Damascus with Syrian Foreign Minister Walid Muallem.

“There is no time to lose,” Steinmeier said after meeting Syrian President Bashar al-Assad and Muallem on the latest leg of a Middle East tour.

But he said the Syrian-backed Lebanese militant group Hezbollah and the Palestinian Islamist movement Hamas had shown “no interest in the success of the peace talks.”

“In my view, the peace process can only proceed when destructive elements in the region are reined in,” the German foreign minister added.

Muallem countered that Israeli demands for Damascus to break its longstanding alliance with Hezbollah and its main foreign sponsor Tehran were an issue that went beyond the foundation of the peace process set down by an international conference in Madrid in 1991 – the exchange of land for peace.

“As for the issue of our relations with Hezbollah or Iran, that’s a precondition,” he said of Israeli demands for a clean break as part of a normalisation of ties under any peace deal with the Jewish state.

“You have to join negotiations to know what will happen afterwards,” he added.

Muallem said Syria’s demands for the unconditional return of the whole of the strategic Golan Heights, which Israel seized in the 1967 Middle East war and annexed in 1981 in a move never recognised by the international community, was an entirely different matter.

“Yes, we do what to get the Golan back on a silver platter,” he said. “Let’s face it – it’s our land and our right to have it back is the most normal thing in the world.”

The last direct peace talks between Israel and Syria, sponsored by the United States, broke down in 2000 when Israel balked at handing back the entire Golan, right down to the shores of the Sea of Galilee, Israel’s main water source.

Israel’s right-leaning government headed by Prime Minister Benjamin Netanyahu has rejected the idea of exchanging the Golan for peace with Syria.

Muallem said Syria supported further indirect contacts with Israel which were frozen after the Jewish state launched a massive offensive against the Gaza Strip in December.

“We think a resumption of indirect contacts with Israel through Turkish go-betweens is the best way of getting to direct negotiations, but first and foremost we have to be confident that there is a political will in Israel to achieve peace,” he said.

Muallem said Syria deserved Western respect for the constructive role it had played in its smaller neighbour Lebanon in recent months.

“Syria did not intervene in the Lebanese elections. Syria will not interfere in the formation of a new Lebanese government, but we want the new government to be a real government of national consensus between all parties that will secure Lebanon’s stability,” he said.

Syria backed a Hezbollah-led alliance in last month’s election in Lebanon that was won by the rival Western-backed coalition of prime minister-designate Rafiq Hariri.

Hariri has said he is ready to renew the national unity government formed after factional violencelast year, but only on condition that Hezbollah and its allies give up the veto powers on cabinet decisions they enjoyed in the outgoing government.