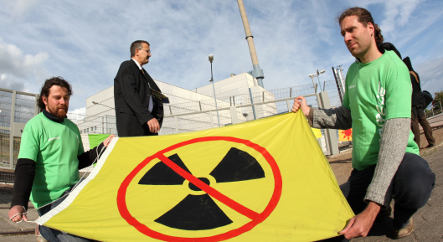 Nineteen cases of leukemia among children under 15 have been recorded since 1989 in the region of Elbmarsch, some 30 kilometres (19 miles) from the city of Hamburg, three or four times the average rate.

“Such a high rate of leukemia is unique in the world,” according to Hayo Dieckmann, a health official in the nearby town of Lueneburg who is also a medical doctor.

Authorities in this area, which bills itself as a center for energy and scientific research, have carried out various studies and tests but failed to come up with conclusive results accepted by all parties as to why it should be a leukemia hotspot.

Campaigners, however, point out that within two kilometres of the region lie the Krümmel nuclear power station and the GKSS scientific research centre, both of which they believe are to blame for the leukemia outbreaks.

The “citizens’ association against leukemia in Elbmarsch” (BI) believes that a nuclear accident took place at the GKSS centre, only six months after the devastating meltdown at Chernobyl.

The campaigners say that a radiation leak occurred at the centre – which operates a small nuclear reactor for research purposes – on September 12, 1986, which was later covered up by the authorities.

“It’s not right to hide from one’s responsibilities. The problem is that the authorities are in cahoots with the nuclear industry,” said Uwe Harden, a local Social Democrat politician and head of the BI campaign.

To prove their hypothesis that the alleged accident is causing the leukemia, the BI campaign invited a nuclear physicist from Minsk, Vladislav Mironov to examine the ground around the centre.

Mironov found radioactive material that was “in no way naturally occurring.”

But another scientist invited to take his own samples by the GKSS came to an entirely different conclusion.

Axel Gerdes, a specialist on radioactive isotopes at the Goethe University in Frankfurt told AFP: “The radiation there was absolutely normal.”

“However, in the samples, I did find some heavy metals: lead, arsenic, zinc, nickel, chrome, etc,” the scientist added.

The existence of heavy metals – which scientists have linked to leukemia – may be explained by the fact that an explosives factory was located on the site of the GKSS centre for 80 years.

It was here that the Swedish chemist Nobel discovered dynamite in 1865 and explosive factories are known to emit large quantities of heavy metals.

The scientists at the GKSS centre vigorously refute the accusation that a nuclear accident was covered up at the station in 1986.

“It’s a myth. There was no accident that day. It was a normal day like any other,” said Iris Ulrich, a biologist and press officer at the GKSS.

Campaigners also point an accusing finger at the Krümmel nuclear power plant which reopened on June 24 after a fire broke out there two years ago.

The plant hit headlines again at the weekend in the wake of two further malfunctions, one of which plunged part of Hamburg into darkness and knocked out the city’s traffic lights.

At the end of 2007, a national survey of nuclear power stations in Germany showed that the risk of contracting cancer rose dramatically for children living near a power plant.

The energy companies strenuously deny there is any link.

Meanwhile, in Elbmarsch, children continue to fall ill with leukemia – the most recent case, of a six-year-old girl, was made public at the beginning of 2009.

“The figures are striking. It’s not just a matter of chance,” said Harden. “They tell us this is normal but they must think we’re totally stupid,” he added.