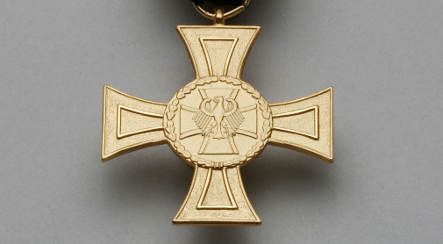 Merkel, along with defence minister Franz Josef Jung, awarded the soldiers the medal for their heroic actions after a suicide bomb attack in the area around Kundus, Afghanistan last October. Two of the soldiers, aged 22 and 25, were honoured posthumously, having been killed when their assailant passed their armoured vehicle on bike and detonated a bomb.

The Bundeswehr, the German military, instituted the medal in October 2009 though the decision to introduce the citation sparked soul-searching amongst German commentators.

Since World War II, the German public has been strongly pacifistic. Some critics have warned that glorifying the armed forces could herald a return of the German militarism that sparked two world wars and killed tens of millions.

While awarding the medals Monday, Merkel rebuked those critics.

“In Germany, too little is said about the achievements, burdens and risks of soldiers,” Merkel said.

With German forces increasingly deployed worldwide, especially in Afghanistan, where they serve as part of the NATO mission there, the government felt it was time to honour German soldiers. Nearly 4,000 German soldiers currently serve in the Afghan mission, which is unpopular with the public.

The medal is a “thank you from the state for very exceptional performance,” said Ulrich Kirsch, the head of the DBwV German Military Association , in an interview with public broadcaster ARD Monday. The association represents over 200,000 current and former Bundeswehr members.