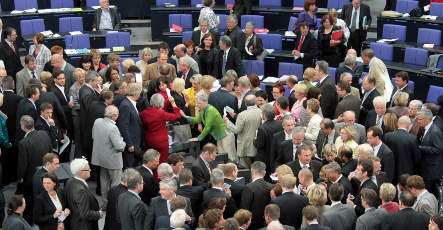 Because the current government is a coalition of Germany’s two major parties, the Social Democrats (SPD) and the Christian Democrats (CDU), fewer laws have had to be presented to an arbitration panel, saving valuable time. It’s happened just 17 times in this parliament, compared to 100 times in the previous period.

As the end of this legislative period draws nigh, the lower house of parliament has passed a raft of new laws in the final week. Here are the most important new acts:

Dual citizenship – Children born of foreign parents will continue to be forced to choose between German citizenship and the citizenship of their parents when they turn 18. An initiative brought by the Green party to overturn this law was dismissed Thursday evening.

Sudan – The German army will continue to participate in United Nations peace missions in Sudan and Darfur, at least until August 15, 2010, the parliament decided Thursday evening. The Bundeswehr soldiers are responsible for the protection and implementation of the 2005 Darfur peace agreement.

Tax evasion – Parliament agreed on Friday to toughen laws controlling tax evaders abroad. Financial authorities will have more power to force cooperation from those with business relations to tax havens abroad, should the host states refuse to share tax information.

Bad Banks – Parliamentarians voted to create so-called ‘bad banks,’ which will relieve the current financial burden on Germany’s banking system in the wake of the economic crisis. Banks will be able to transfer their toxic assets in the hands of the bad banks to cleanse their balance sheets. This law awaits approval by the Bundesrat on July 10.

Overhang Seats – The Green party lost a motion to end a quirk in the German voting system that allows parties to receive “overhang seats.” These extra parliamentary seats are created when a party wins more seats by direct mandate than it should be entitled to according the percentage of the population that voted for it.

The increasingly unpopular centre-left Social Democrats (SPD) were also keen to end the situation, as it is thought that Angela Merkel’s conservative Christian Democrats (CDU) will benefit from it in this year’s election, but hesitated to back the proposal for fear it would breach their coalition agreement with the CDU.

Other votes are due to be held on Friday, including:

Data Protection – Data protection laws are due to be strengthened after a series of scandals involving the abuse of personal employee data by large companies, including rail operator Deutsche Bahn, telecommunications giant Deutsche Telekom and retailer Lidl.