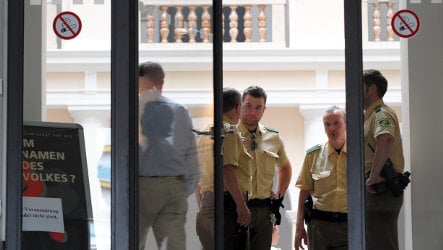 According to Egyptian newspapers, the woman was Marwa al-Sherbini, a 32-year-old Egyptian national who was suing her attacker after he insulted her for wearing the Islamic headscarf. The attacker, identified only as Alex W., was appealing the €780 fine he was ordered to pay in the libel suit.

Al-Sherbini was the wife of Egyptian academic Elwi Ali-Okaz. He was also hurt in the incident after he tried to help his wife and is in critical condition in hospital. Police are now investigating Alex W. for manslaughter.

“The investigation into this bloody crime is bound to show there are some indications the suspect was hostile toward foreigners – the signs are there,” said Saxony police chief Bernd Merbitz told Bild.

Magdi al-Sayed, press officer at the German embassy in Cairo, said the case was isolated and did not reflect German attitude towards Muslims.

“It is a criminal act. It has nothing to do with persecution against Muslims,” Sayed told the Egyptian state newspaper The Gazette.

The stabbing happened July 1, just before al-Sherbini was to give her evidence. During the struggle, other bystanders were also injured and police fired a shot. Al-Sherbini died in the courtroom.

The 28-year-old attacker was overpowered and is now under investigation for manslaughter, a spokesman for the Dresden prosecutor’s office said.

Chairman of the German judge federation Christoph Frank is now demanding that safety and security measures must be brought up to standard.

“Each individual law court must be examined and security infrastructure put in place to better protect citizens,” he said to the Bild.

The incident recalled a similar scene of courtroom violence in the Bavarian town of Landshut in April, when a 60-year-old man shot his sister-in-law before turning the gun on himself, following an inheritance ruling.