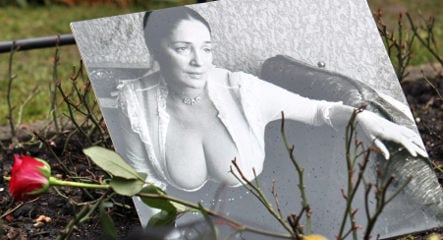 The 77-year-old artist Tomi Ungerer’s parting gift to his friend Domenica Niehoff was to be a gravestone featuring two ample pink marble boulders in homage to her famously top-heavy figure. But those responsible for the Garden of Women cemetery, resting place of Hamburg’s most famous women, turned his design down, the paper reported.

Ungerer, who declared his interest in designing her gravestone immediately after her death, reacted bitterly to the decision.

“Domenica would have liked my design. She was not ashamed of herself,” he said.

Ungerer and Niehoff were friends for decades, and even shared a flat for a while in 1984. He published drawings of Niehoff and her colleagues in a book entitled “Guardian Angels of Hell” at the time.

But the cemetery officials are not alone in criticising Ungerer’s memorial. Photographer Günther Zint, another friend of Niehoff, told the newspaper, “There was a bit of a debate among her friends whether Tomi needed to emphasise her breasts like that. They were after all a bane of her life.”

Niehoff, who gained fame for advocating the rights of sex workers in the 70s and 80s, died at age 63 in February 2009.

Originally from Cologne, Niehoff lived through drugs, child prostitution and desperate attempts to get out of the sex trade. She grew up in an orphanage before slipping into prostitution, when she married a brothel owner, who committed suicide ten years later.

She worked as a prostitute in Munich and Hamburg and had her own brothel before she began to push for the legalisation of prostitution in Germany in the 1980s. She then became a social worker to help women to get off the street.