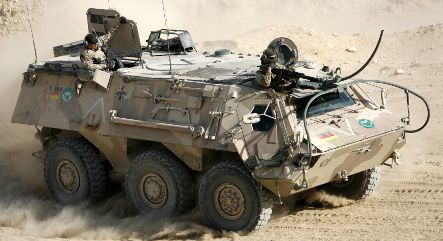 Craddock had a few parting shots for Europe as he formally handed over his post on Tuesday, criticising the continent’s engagement in Afghanistan.

The US general said European leaders often used critical public opinion “as an excuse not to forge ahead” in hotspots such as Afghanistan.

Taking aim in particular at Germany’s mandate in Afghanistan which places restrictions on the use of military force, Craddock said: “Unfortunately we have far too many limitations in Afghanistan.”

He said the debate over the use of military force was often driven by opinion polls among voters “regardless of whether they are informed or not.”

Craddock said the German debate about whether the seven-and-a-half-year military engagement in Afghanistan amounted to a war was superfluous.

“The politicians can call it whatever they like. I am a military man and for me it is a war. And I think if you ask German soldiers they would call it the same thing.”

Admiral James Stavridis took over from Craddock as head of the US European Command (EUCOM) at a ceremony Tuesday at its headquarters in the southwestern German city of Stuttgart attended by US Defense Secretary Robert Gates.

Stavridis, 54, was previously head of the US Southern Command, based in Florida.

Like his predecessor, Stavridis will assume command of US forces in the region at a particularly delicate time for NATO.

The alliance’s credibility is being seriously tested by its engagement in Afghanistan, where extremist Taliban fighters are successfully spreading violence across the country ahead of presidential elections in August.

The position of supreme allied commander of NATO traditionally goes to an American.

Meanwhile German troops could be out of Afghanistan within five to 10 years, Defence Minister Franz Josef Jung said in a television interview broadcast on Wednesday.

Asked on German rolling news channel N24 whether troops would leave the war-torn country by 2020, Jung said: “I assume so. In five to 10 years – that is my message.”

“The quicker we push forward with training (Afghan police and security forces), the quicker we will achieve our goal,” added the minister.

He said he was “utterly convinced” that the Allied strategy would lead to success.

“And success means that Afghanistan must be in a position to look after its own security. That is our goal.”

Some 3,700 German troops are fighting in Afghanistan, where they form part of the 60,000-strong International Security Assistance Force led by NATO and made up of troops from 42 nations.

The mission is extremely unpopular in Germany and 35 troops have died since 2002 despite being based in the relatively peaceful north of Afghanistan.

In the most recent incident, three soldiers aged 21-23 died last week when their armoured vehicle overturned while reversing during a firefight with insurgents near the northern town of Kunduz.

Germany’s contingent is being raised to up to 4,400 ahead of Afghanistan’s presidential elections in August.