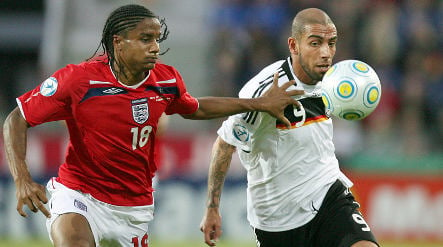 Stuart Pearce’s men booked their place in the final with a victory on penalties over the hosts in their semi-final in Gothenburg, having let a 3-0 half-time lead slip.

The victory also exorcised the demons of England’s exit from the 2007 tournament, when they went down 13-12 to the Netherlands in a heart-breaking semi-final penalty shootout.

“We can’t wait for the final now,” Walcott said. “We have two days to recover and prepare, and everyone will be buzzing. We have 23 players in the squad who have been fantastic throughout the tournament.”

Walcott is likely to start in a central striking role against the Germans, with strikers Gabriel Agbonlahor and Frazier Campbell both suspended.

Pearce will also be without goalkeeper Joe Hart, who picked up his second booking of the tournament during the shootout against Sweden, but the former England left-back says the right mindset will be crucial.

“The team who has the most guts, takes their chances when they come and maybe has enough fit players will win the game,” he said. “It’s the furthest I’ve been in international football as a player or a manager so it’s a step in the right direction. We need to win one more match and one team stands in our way.”

Germany, meanwhile, are gunning for their first Under-21 European crown since 1982, having edged Italy 1-0 in their semi-final in Helsingborg.

They drew 1-1 with England when the sides met in the group stage but Hoffenheim defender Andreas Beck, who scored the winner against Italy, says the final will be a different game.

“This fixture has been a classic in the past and we’re really looking forward to it,” the 22-year-old told the UEFA website.”

“In the group stage it wasn’t a great game, but they had changed their starting eleven completely and for us a draw was enough.”

“This final will be a completely open game. The English have a few suspended players, but we don’t really care about that.”

“We want to focus on our team and will go into the match fully confident we can win. They’ll have different players but we’ve scouted them and know their strengths and weaknesses. It’ll be a classic.”