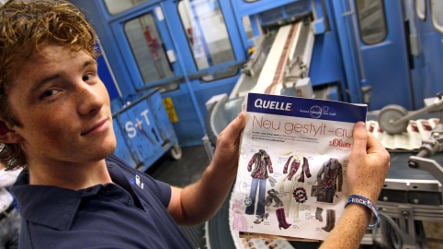 Its last money was transferred to mother company Arcandor just hours before the company declared bankruptcy at the start of the month, a spokesman confirmed, reacting to a report in the Süddeutsche Zeitung.

Suppliers have since been supporting the company with services and goods, trusting that the government will decide to fund it next week.

Even the costs of printing and delivering the Quelle catalogue are being borne by the printer Prinovis.

Horst Seehofer, head of the Bavaria-based Christian Social Union, CSU, has urged Chancellor Angela Merkel to decide in favour of the company, and criticised the government for taking so long to make a decision.

“I appeal to the government to approve the credit by Monday at the latest, as otherwise the jobs at Quelle will be acutely endangered,” he said.

Seehofer said Bavarian promise was responsible, and would not be a waste of tax-payers’ money. He also criticised anonymous comments made to newspapers by members of the government saying that Quelle was not seen as worth saving, as irresponsible.

More than 10,000 people are employed by the company in Bavaria.

The workers’ council said it would try to check the reports of cash transfers to Arcandor. “We want to know, to the last euro and cent, what went on over the last few days,” said Ernst Sindel.

A spokesman for Arcandor said there was nothing strange about it, and stressed that the money transfers did not have anything to do with the Quelle bankruptcy.

Seehofer said the group, also known as “Wolfsbrigade 44”, “sows hatred” and “advocates the re-establishment of a Nazi state”.

“Anyone who fights against the fundamental values of our liberal society will feel the determined reaction of the constitutional state,” the minister said in a statement.

Early on Tuesday, almost 200 police officers began searches of premises linked to 11 alleged members of the group in a number of regional states.

Police found weapons, including knives and crossbows, as well as propaganda items such as swastikas and Nazi flags, the interior ministry said.

Members “openly declared their support for Adolf Hitler”, the ministry said, adding that the group was “particularly characterised by militaristic appearance” and “pronounced racism” as part of an “inhuman ideology”.

In July last year, prosecutors raided apartments in several German states of members accused of being part of the group, which was founded in 2016.

Six were suspected of having formed an armed group within the organisation, authorities said at the time.

In February, a far-right extremist killed 10 people and wounded five others in the central German city of Hanau.

And last year, two people were killed after a neo-Nazi tried to enter a synagogue in Halle on the Jewish holiday of Yom Kippur.

The Interior Ministry has said far-right and anti-Semitic hate crime spiked in the country in 2019.