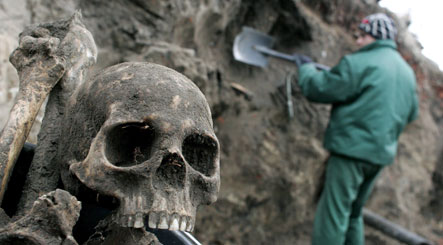 “Their remains will be transferred to Glinna, near Szczecin … the reburial ceremony will take place August 14,” said Andrzej Przewoznik, head of Poland’s Council for the Preservation of the Memory of Struggles and Martyrdom, told the Polish PAP news agency.

The decision to transfer the remains to a German war cemetery in Poland was taken by German authorities, Przewoznik explained.

A mass grave with the remains was discovered by chance on October 28, 2008 during construction work on a new hotel. It was located just 300 meters from Malbork Castle, a medieval fortress built by the Teutonic Knights in what was then Prussia. Polish authorities exhumed all the remains.

According to experts, the grave contained the remains of 2,120 people including at least 1,001 women, 381 men and 377 children. It was impossible to determine the age and gender of others found in the grave.

The initial findings of an investigation conducted by Poland’s Institute for National Remembrance (IPN) indicated those who perished were mainly German civilians.

They had died due to cold, starvation and illness or were killed in fighting in the area between Nazi and Soviet troops in January and February 1945, the probe showed.