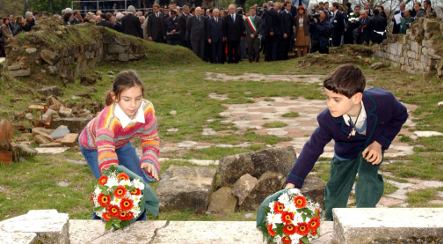 Children lay flowers at the site of another SS massacre site in Italy Photo: DPA

Germany was also condemned as a civil party to the crimes and ordered to pay €1.25 million to the families of the victims.

Eleven former Nazis were tried for the massacres, but one of them, Max Roithmeier, a former sergeant in the SS, died during the trial and a second, Walter Waage, was acquitted by the court.

The nine other defendants were given life sentences for their part in the “violence and murders” which resulted in the deaths of around 350 Italian civilians, many of them women, children and old people, and for “acting with cruelty and premeditation” according to the court’s verdict, cited by ANSA.

“The sentence finally does justice to those who suffered directly the atrocities of Nazism,” Claudio Martini, regional president of Tuscany, said. “Even if 65 years have passed, we should not forget what happened.”

Around 350 people living in the villages or hamlets of Bardine di San Terezo, Tendola and Valla, in the Fivizzano district, were massacred between August 19 and 27 in 1944. Fifty three men were shot and their bodies put on show with a notice warning, “This is what happens to those who help the partisans.”

The inquiry into the massacres was re-opened after the military records of 695 Nazis liable to be prosecuted for war crimes committed during the Nazi retreat from Tuscany and Emilia-Romagna were found languishing in a cupboard – dubbed “the cupboard of shame” – in 1994.